to see this Biography in English  please scroll down, or click here ⇒     Biography (in ENGLISH) 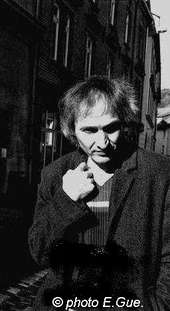 AN ARTIST BETWEEN FICTION, REALITY AND ORDINARY MADNESS

Damijan Fric was born in 1964 in Maribor in current Slovenia. His Grandfather was during his own lifetime a known artistic painter in his surrounding area. Damijan Fric spent much time with his Grandfather in Slovenia because Damijan´s parents belonged to the generation of „guest workers“ living at times in Germany. His Grandfather´s paintings were dominated by his farming life in a contemplative little village near the greater town of Maribor. His paintings showed hunters on a rest, musicians, depictions of Jesus Christ, romantic lakes with swans, huts in the hills and nature as far as the eye can reach.

These depictions of nature shaped also his grandchild – the artist Damijan Fric. Damijan´s paintings also might show farm life, like the cabin in „The Hideaway“ (2012). While his Grandfather´s landscapes and everyday scenes were painted in the romantic style, Damijan integrates into his paintings a humor (reminiscent of the well-known painter Carl Spitzweg), that leaves the admirer with a rogue smile, like after seeing „Sound Check“ (2009).

And it is from his restless Grandfather who sold his art in the streets and from door to door that Damijan Fric learned the trade of Fine Arts, which he worked to master by patient self-study day by day. His virtuosity brought him to a level that could be an example for quite a few other university alumni. The accuracy of his style, the plasticity of the forms, the width of his landscapes and complicated orders of perspective, as well as the precise placement of light and shadows, show a true mastering of his arts.

Yet his style isn´t stationary and rigid. Instead, it is brought on with a featherlike lightness and is not inferior to his role models like Salvador Dali, Max Ernst or Rene Magritte. It is these surrealistic artists who showed Damijan Fric the freedom of the reaches of paintings. These include anything from fantasy, dream interpretations, visionary depictions, allegories to anything symbolic – even if the symbol in question is evident in meaning only to the artist himself.

In his fictional paintings it is penguins who leave the Earth, like in „Emigration“ (2008), because from global warming their environment becomes unnhabitable. Entire hurricanes or typhoons are crashing over musical instruments or the lone conductor, and are beeing ripped away like in „Ocean´s Symphony“ (2008). Or the little man and the piano, both drunk, stagger from the stage through the night, like in „The Drunk Piano“ (2007) – just ordinary madness.

His paintings touch on a critique of society and visions of an endangered future – even with soap bubbles of soaring lightness as in „Big Bang Bubble“ (2007). But soap bubbles can burst fast too. Space with its real and metaphysical phenomenons are of special interest to the artist since his university stint in the study of physics. A recurring theme is reflected in his scenes like „Rebirth“ (2008) or „Sternschnuppen“ (2008). The reasearch of law in nature and philosophy are the stimulus for his art, which are mirrored in a humorous way in „The Astronomer“ (2007) or „The Swinging Philosopher“ (2011).

Yet he also takes a look at himself, and the breadth and depth of his own thoughts and contemplations of his being are recognized in his paintings when the male person depicted is himself, as in „The Sudden Gust of Wind“ (2008) or „Cosmic Billiards“ (2007). Both his children are also occasionally a source of new artwork and their faces and figures are at times models, as in „Involved Angel“ (2006). The paintings of Damijan Fric have charm and likeability, as this reserved and modest artist himself is charming and likeable. His works are painted stories having a strong sensibility for society, for animals and for nature on this earth, which we are all part of and therefore have the responsibility to protect.

Damijan Fric is a freelance artist who since 2003 has built a large base of fans and keen supporters in the USA, who are always looking forward to his creation of new artwork. It is time that this artist, full of fantasy and very developed in his trade, gets recognition in Germany also. Both because his paintings are touching to the onlooker, and because his menacing fictions should be recognized so they do not ever become reality.